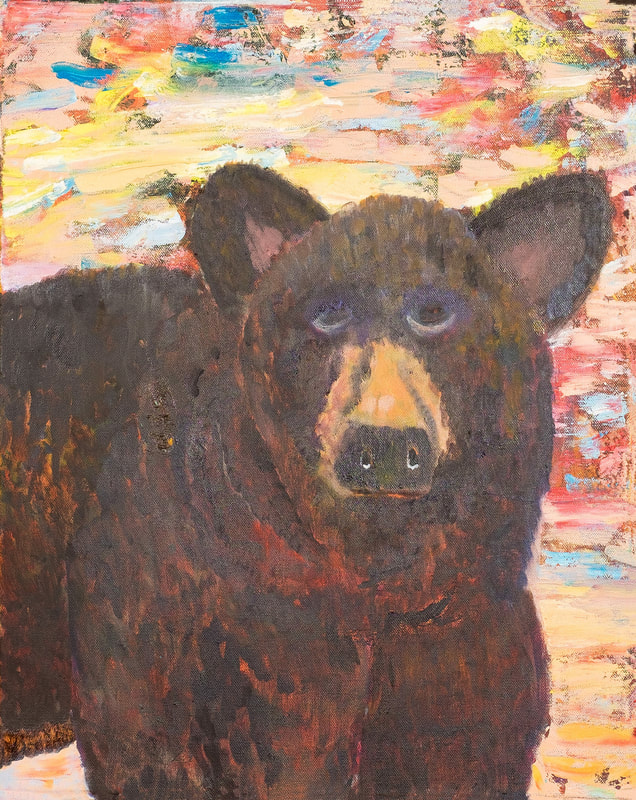 I don't think any of my other paintings has held quite this much meaning for me. This is a large part of my story, in one painting.

It began when I was 14, on a camping trip. My sleeping bag got wet, keeping me up later than all the other kids who were packed into our tent. So, I was the only one still awake, when I heard a rhythmic thudding approaching the tent. The nearly full moon, revealed after the days rain had finally let up, cast a shadow on the tent, confirming the source of the thud. A black bear. I have two distinct memories at this point: first, thinking, that if I made any noise, possibly waking up some of my friends in the tent, they might react in a manner which, I’ll say, could have prompted the bear to explore further. My second memory though was of simply freezing up. That third, often-overlooked option from the fight or flight equation, a possible genetic anachronism - a remnant of hundreds of thousands of years of big game hunting (i.e. if the lion sees you, stop moving, as the movement draws the attention). As the bear came to the tent, it pushed in the thin fabric wall, gently rolling me in my rigid, hot dog like posture. That was it. It moved on, took some of our food and left the campsite.

I didn’t make much of it at the time - nothing had really happened to me, so I don’t even recall telling anyone. As I truly loved canoe camping, I kept doing it, eventually spending the better part of ten summers guiding trips. With each return though, sleeping outside became tougher, both physically and (though I wouldn’t recognize it for years) emotionally. Having never acknowledged the initial trauma, hyper-vigilance set in, keeping me awake and attuned to the slightest noise in the forest. Slowly, my condition, dystonia, unfolded (dystonia is a neurological disorder causing involuntary muscle contractions - there are many varieties, with mine ultimately being one which caused significant, painful spasms throughout the body, from the top of the head, to the bottom of my feet. I never would have guessed that the ears, nose and eyes can go into spasm as well...there’s been a lot of learning!). I became less mobile, more fearful of movement and eventually it became clear that I could no longer go out on trips. As someone who had been a weightlifter at 12, always active, this was devastating.

I continued to retreat, physically and emotionally, avoiding any vulnerability. It was around this time though, that I started to pour myself into art. No training, barely a sense of what I was doing, but I enjoyed painting landscapes as a means to remain connected to nature. So, I closed myself off in my home and painted for years prior to considering sharing my art. The dystonia continued to progress, bringing migraines for 6 months at a time, the always shocking routine of my jaw locking open and my tongue retracting, sometimes blacking out when going to the bathroom - things were looking bleak.

I did see a specialist in 2016 though, a brilliant man, Dr. Joaquin Farias, who had a novel understanding of the disorder. During his group session which I attended, he kept encouraging us to relax, to let our guard down, repeating that there’s no tiger in the room. No tiger….what about a bear!?!?  It took over 20 years, but we believe that we have discovered the trigger for my once-dormant disease - that relatively benign incident with the bear. He also taught me that, when I sense that my jaw is about to lock open and that I’m about to choke on my tongue, I need only stick my tongue out to interrupt that chain. Such a rapid, significant change, facilitated by a greater understanding….

It took a while for Dr. Farias’ lessons to start to sink in and for my daily neuroplastic exercises which he prescribed to have an effect, but I have now seen significant progress, no longer requiring the Botox injections and painkillers I had been on for years. I painted this bear in February 2017 as a functional item. I hung it in my bathroom, seeing its reflection in the mirror as I do my neuroplastic exercises and more significantly, it’s what I look at when I pee! Painted in a neutral manner, this bear shows no aggression, it is just being a bear. When I approach it now, it soothes me, reminding me that there is no danger, no reason for my nervous system to retreat and shut my body down, leaving me limp on the floor. It is a representation of my recovery.

This is why the price is so much higher than for any of my other work. This painting has helped a great deal with my recovery - it would take a significant sum to offer something equivalent.